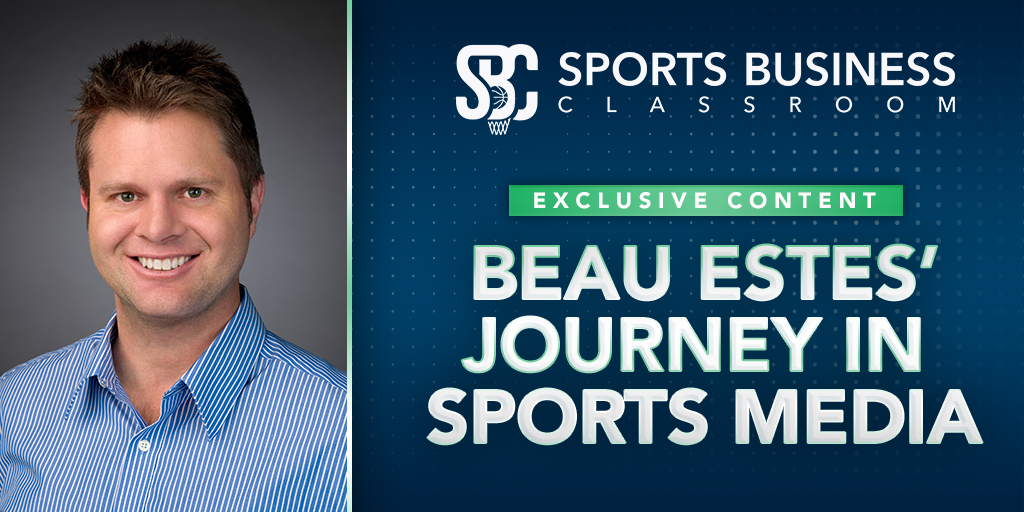 Beau Estes did not get into sports media expecting to be known as the rhyming, high-energy “completely wild and wacky” highlight host he is today.

“It wasn’t exactly where I thought I’d end up,” Estes says. “But as I sit here now and look back on it, if you told me I’d do something silly and hopefully funny that was involved with the NBA, would it have made sense? Sure! I’d have bought that all day long.”

When Estes first got started at Turner Sports in 1994, his dream was to be a studio host calling highlights and doing interviews. Really, it was his dream well before that.

“I told my parents I wanted to be a sportscaster when I was five years old,” Estes says. “I never went to a guidance counselor.”

Estes never wavered from that path. He interned at CNN as a Junior while in college, attending both Kennesaw State and Clark before covering the 1996 Olympics in Atlanta. He then had myriad gigs covering Atlanta sports teams. He worked Braves games as a TBS studio host (the other host at the time was Fox NFL’s Erin Andrews), Hawks games as a sideline reporter and halftime host, and Thrashers games as an intermission host. He joined Turner full-time with a NASCAR job in 2006 and began working for NBA.com in 2008.

While Estes’ route seems like a blueprint for breaking into sports media, his specific path would be difficult to replicate for someone looking to get their start today. The industry is moving away from traditional game coverage, replacing it with shorter-form multimedia and multiplatform content.

According to Estes, the shift is a net positive.

The ability to tailor content to each individual user has created new industry opportunities that were not there 25, 10 or even five years ago. As we move into the future, the options available to content creators will continue to multiply.

“The people that find what users want and can pinpoint that content, those are the people that are going to be successful,” Estes says.

Count Estes among those who are hitting that target. While the sports media landscape is pushed forward by younger people who Estes says “know more about the game than ever,” it is his experience, historical and cultural knowledge and love for his craft that keep his work fresh, funny and engaging.

Estes attributes some of his personal flare to two staples of 1990s NBA coverage: Inside the NBA’s Ernie Johnson and SportsCenter’s Craig Kilborn. Beyond that, it’s just him being himself.

“I’m certainly not someone who runs around yelling at people in rhymes during my trips to the grocery store,” Estes says, “but I do have a bit more fun in daily life than you would see in a normal serious highlight package.”

When asked what he would do if forced to choose between covering basketball in a completely dry manner for the rest of his life and covering something completely unrelated—like the Westminster Dog Show—in his preferred high-energy style, Estes said that his love of the game would win out.

“If Turner said ‘Beau, we just want you to be straight man the rest of your life,’ I would certainly do it because I love basketball so much and I would just figure out another way on the side to do something else fun.”

“No one’s offering me the Westminster Dog Show, anyway.”