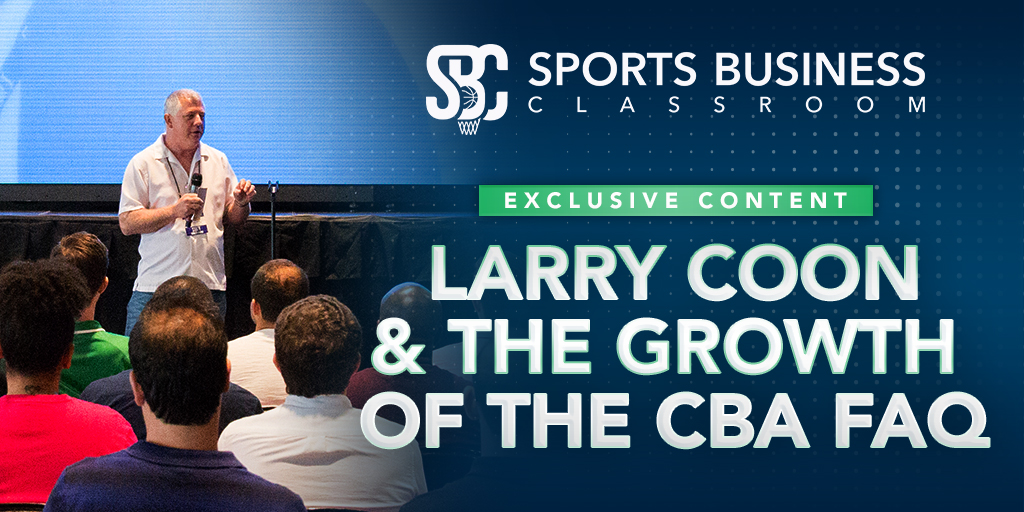 Larry Coon describes the Lakers games his father would watch as the background noise of his childhood home. Since the 1980s he has worked in information technology at University of California, Irvine, and now leads its Business Intelligence initiative.

It’s only natural that he was one of the first basketball fans on the internet.

He recalls fondly the inquisitive energy of the online basketball community’s early days. “A lot of NBA discussion groups were there, and you would just start carrying on conversations about the league,” Coon says. “What is a team looking to do to get better? How might they do it? How does all this stuff work?”

There were far more questions than answers, however. “The rules of basketball were always well documented. The rules for front offices were not.” This was the primary impetus for Coon’s now-legendary CBA resource.

Coon was familiar with the utility of FAQs, as they were common in the computer science world. He realized that creating one could help fill the NBA community’s knowledge void.

With the help of some interested friends, Coon collected and curated all the necessary information. He eventually was able to get the CBA itself from the league, which both answered questions and created new ones.

“I didn’t know how to read the thing really, and it’s kinda not written for that,” Coon says. “A rule might be spread across three different places in the CBA and they knew how it worked together, but I didn’t…so I became friends with lawyers in the league office who were responsible for it.”

Coon himself is not a lawyer, which is hard for many people to fathom. How can someone without a law degree summarize an immense legal document so effectively that lawyers who work in basketball operations now use him as a resource?

“I pride myself on being a logical and critical thinker. There’s a philosophical movement called scientific skepticism and I definitely consider myself to be in that mold,” says Coon. “Lawyers also tend to think in that way…so I can see how somebody who’s in basketball and sees my ability to parse this huge legal contract saying ‘yeah, you think like a lawyer.’”

Coon’s work was not instantly discovered by those in the league. When he first released the FAQ in 1999, his only goal was for it to become a resource used by fans and media professionals. He would email journalists who had written something factually inaccurate, explain how the rule worked, and share the FAQ. It was so well received that his document, and later Coon himself, started getting quoted directly.

“That gig sort of blew it all up,” Coon says.

Today, 20 years after its initial release, Coon’s CBA FAQ is as much an NBA insider resource as it is a public one. “There are GMs in the league who tell me they have their jobs because of me,” he says.

As instrumental as Coon’s document has been for myriad journalists, basketball operations workers and even top executives, one career it has not dramatically altered is his own. “I have had offers to work in the league…but they would have to pay me so much that it doesn’t make any sense,” Coon says. “I have too much equity built up in my career to leave it now. . If I was in my 20s, where I hadn’t put in so much time with U.C., didn’t have a family, didn’t have a house and could move around more easily…then maybe. But now? No way. I’m very happy with the NBA as my sideline.”

Coon might not be an NBA employee. Or a lawyer. He’s just a basketball-loving computer scientist whose creation has changed the way fans, journalists and NBA personnel alike think about and understand the league and its machinations.